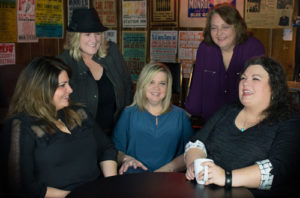 Nashville, Tenn. – The hype for all-star female Bluegrass group Sister Sadie continues to grow after the release of the highly-anticipated sophomore project, Sister Sadie II. The collection now serves as the critically-acclaimed singer/songwriter’s highest charting project together as a band, with members consisting of Dale Ann Bradley, Tina Adair, Gena Britt, Deanie Richardson, and Beth Lawrence. After its first week of release, Sister Sadie II storms its way onto the Billboard Bluegrass Albums Chart as the highest new entry onto the chart, debuting at No. 2 for the week of September 15.

“We couldn’t have picked a better weekend for the release of our second record – Sister Sadie II – on Pinecastle Records. It worked out that we were playing the Delaware Valley and the Thomas Point Beach festivals which are both awesome places that we love,” said Tina Adair of Sister Sadie. “We had a blast celebrating our new release with all the folks at both places. And wow… what a nice surprise to get the wonderful news today that we’ve debuted at #2 on the BILLBOARD Bluegrass Albums Chart for the week – we are beyond grateful for everyone that has helped us reach this spot by purchasing our new music.”

Fans were treated to the lead single, “Losing You Blues” earlier this summer. The official video was also unveiled on The Bluegrass Situation, where fans were give an exclusive first-watch. Shot on-location in Knoxville, Tenn., the band takes fans inside a home style jam, featuring all five world renowned musicians, each at the top of their game. Bluegrass enthusiasts can watch the full video here. The song recently hit No. 1 on Roots Music Report’s Contemporary Bluegrass Song Chart.

To celebrate the release, Sister Sadie held their album release party at the Delaware Valley Bluegrass Festival on September 1. The annual event is held in Woodstown, New Jersey, the site of the prestigious event which was founded by Bluegrass pioneers Bill Monroe and Ralph Stanley. During the evening, attendees were able to see the group perform songs from Sister Sadie II for the very first time, along with meeting the band after the performance to purchase a signed copy of the new project.

Sister Sadie will be rolling into IBMA later this month as finalists in the category for “Emerging Artist of the Year.” Additionally, Dale Ann Bradley is up for “Female Vocalist of the Year,” an award which she’s won on five separate occasions. The Gena Britt composed “Raleigh’s Ride” is also being used by IBMA as a soundtrack for marketing and upcoming World of Bluegrass festivities, which the band will be performing at. The IBMA Awards are set to take place on September 27 in Raleigh, N.C. at the Duke Energy Center for the Performing Arts.