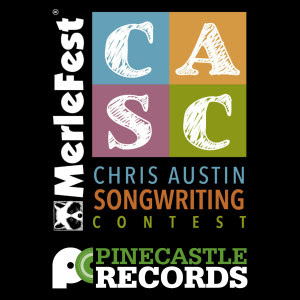 Pinecastle is proud to present the 2015 MerleFest Chris Austin Songwriting Competition Winners. This marks the first year the label has presented the winning songwriters with a chance to record their winning compositions and make them available to radio and the public. Visitwww.pinecastlemusic.com/casc to preview the tracks. Here are this year’s participating winners:

Available on iTunes
Available to Radio Stations on AirPlay Direct

MerleFest, considered one of the premier music festivals in the country, is a celebration of “traditional plus” music. The festival presents a unique mix of music based on the traditional, roots-oriented sounds of the Appalachian region, including bluegrass and old-time music, and expanded to include Americana, country, blues, rock and many other styles.

Chris Austin, a local from the MerleFest area, was offered a recording contract by executives at Warner Bros. Nashville, during his tenure as a sideman for Rickie Skaggs. Austin’s songwriting skills matured while releasing singles like “Blues Stay Away From Me,” “I Know There’s a Heart in There Somewhere” and “Out of Step,” as evidenced in “Same Ol’ Love,” recorded by Skaggs in 1991. On March 16, 1991, Austin’s life was cut tragically short when the private plane carrying him and six other members of Reba McEntire’s band, as well as her tour manager, crashed in the mountains near San Diego. Pete Fisher, then of Warnersongs and currently general manager of the Grand Ole Opry, and Kari Estrin, then MerleFest consultant and “Pickin’ for Merle” video associate producer, initiated the songwriting contest to honor Austin’s memory.

Net proceeds from the Chris Austin Songwriting Contest help support the Wilkes Community College Chris Austin Memorial Scholarship. Since its inception the scholarship has awarded over $38,000 to 81 deserving students.

Critically-acclaimed Americana artist Jesse Bellamy, famed Texas singer-songwriter Bruce Robison and legendary bluegrass icon Peter Rowan were the judges for the on-site final round of this year’s Chris Austin Songwriting Contest. Judging is based on a song¹s originality, lyrics, melody and overall commercial potential. The contest is open to those whose primary source of income (50 percent or more) is not derived from songwriting or publishing.

For more information on the contest visit: www.MerleFest.org/CASC

Deanie Richardson Debuts on Pinecastle with Her Single “Stoney Mae”

Kim Robins Debuts on Pinecastle with “Raining in Baltimore”