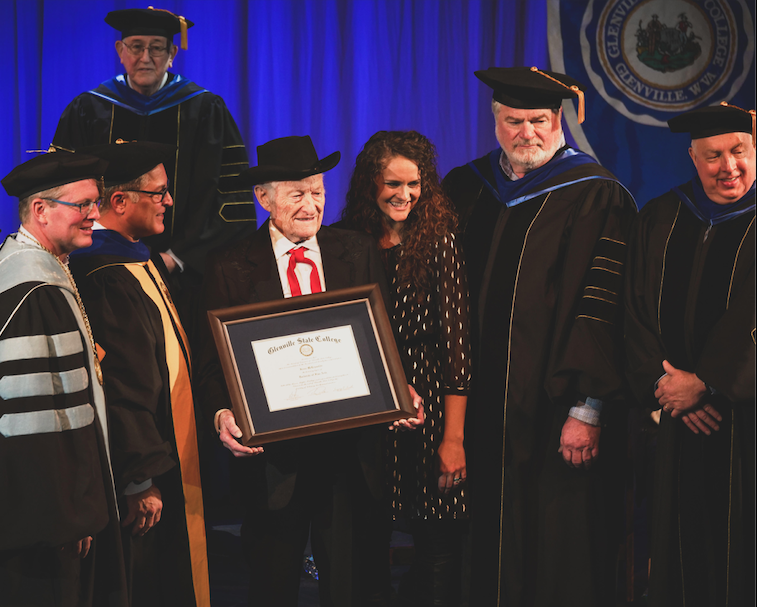 Nashville, Tenn. – With the New Year in full swing, Bluegrass legend Jesse McReynolds is kicking off 2019 on a high note. The Grand Ole Opry member received a very special recognition at the Country Music Hall of Fame, being celebrated with a doctorate bestowed upon him from Glenville State College, located in West Virginia. During the ceremony, other Bluegrass legends were also honored, including Jesse’s late duo partner Jim McReynolds. In celebration, the duo’s catalog collection of releases via Pinecastle Records are now available for purchase and streaming. These include the popular Old Dominion Masters box set (available here).

“I am most honored to have received a Doctorate in Fine Arts yesterday from the Glenville College in West Virginia,” said Jesse McReynolds prior to an appearance at the Grand Ole Opry. The Bluegrass icon also appeared this week on a very special Opry, celebrating Del McCoury’s 80th birthday.

Born in Carfax, Virginia, Jesse McReynolds is best known for his innovative cross picking and split-string styles of mandolin playing. Very early in his career, Jesse developed a “McReynolds style” technique on the mandolin, combining his invention of cross picking and split-string playing. Jim and Jesse McReynolds began performing together in 1947. Following Jim’s death in 2002, Jesse continued to perform and record as a solo artist. Currently, he is the second-oldest standing Opry member, four months younger than Jan Howard.

Jesse McReynolds is pleased to announce that he has returned to the studio for an upcoming album to be available later this year. The project is set for release via Pinecastle Records. Stay tuned for more information to come about the anticipated release, as the award-winning musician celebrates his 55th Anniversary milestone since being inducted as an Opry member.