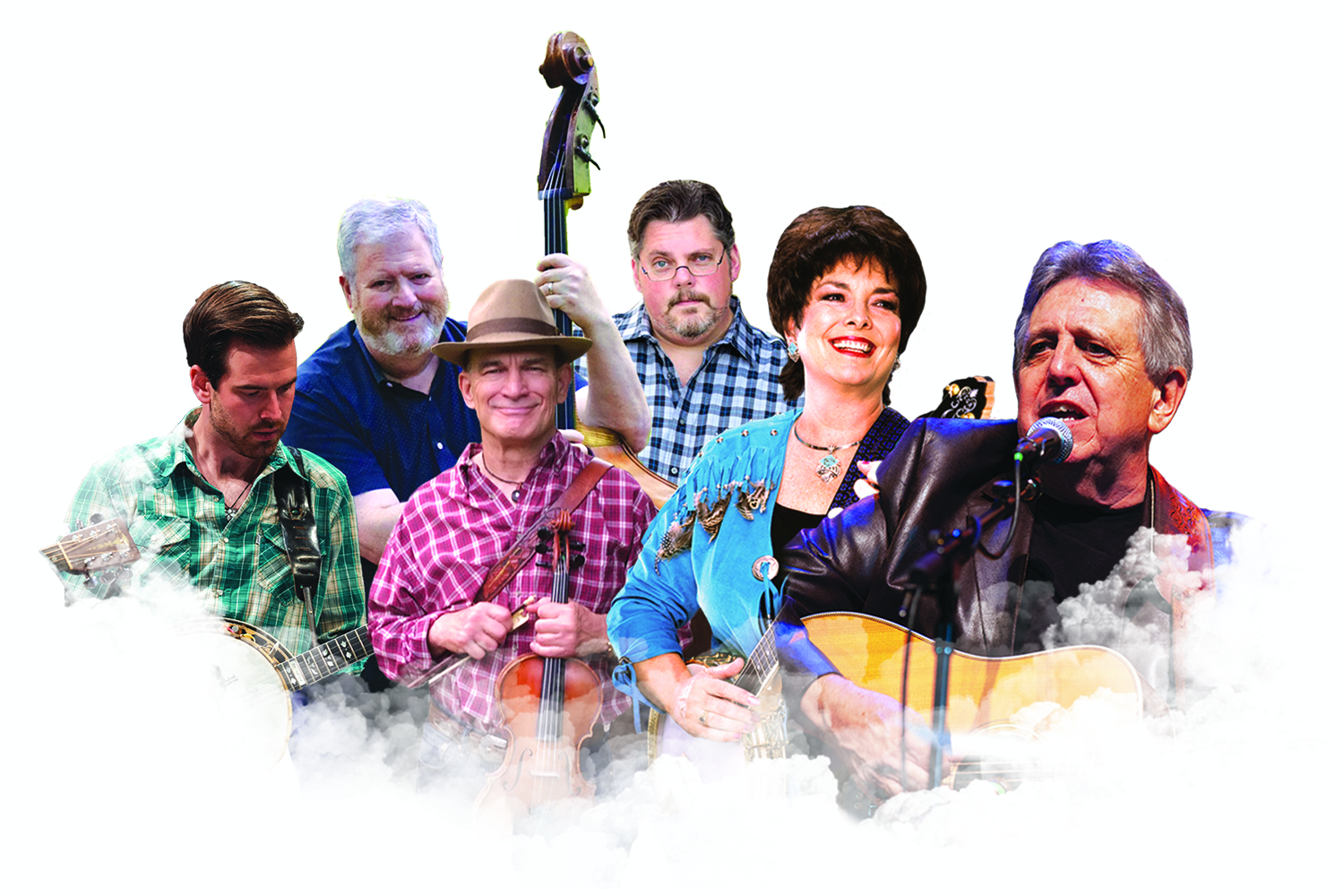 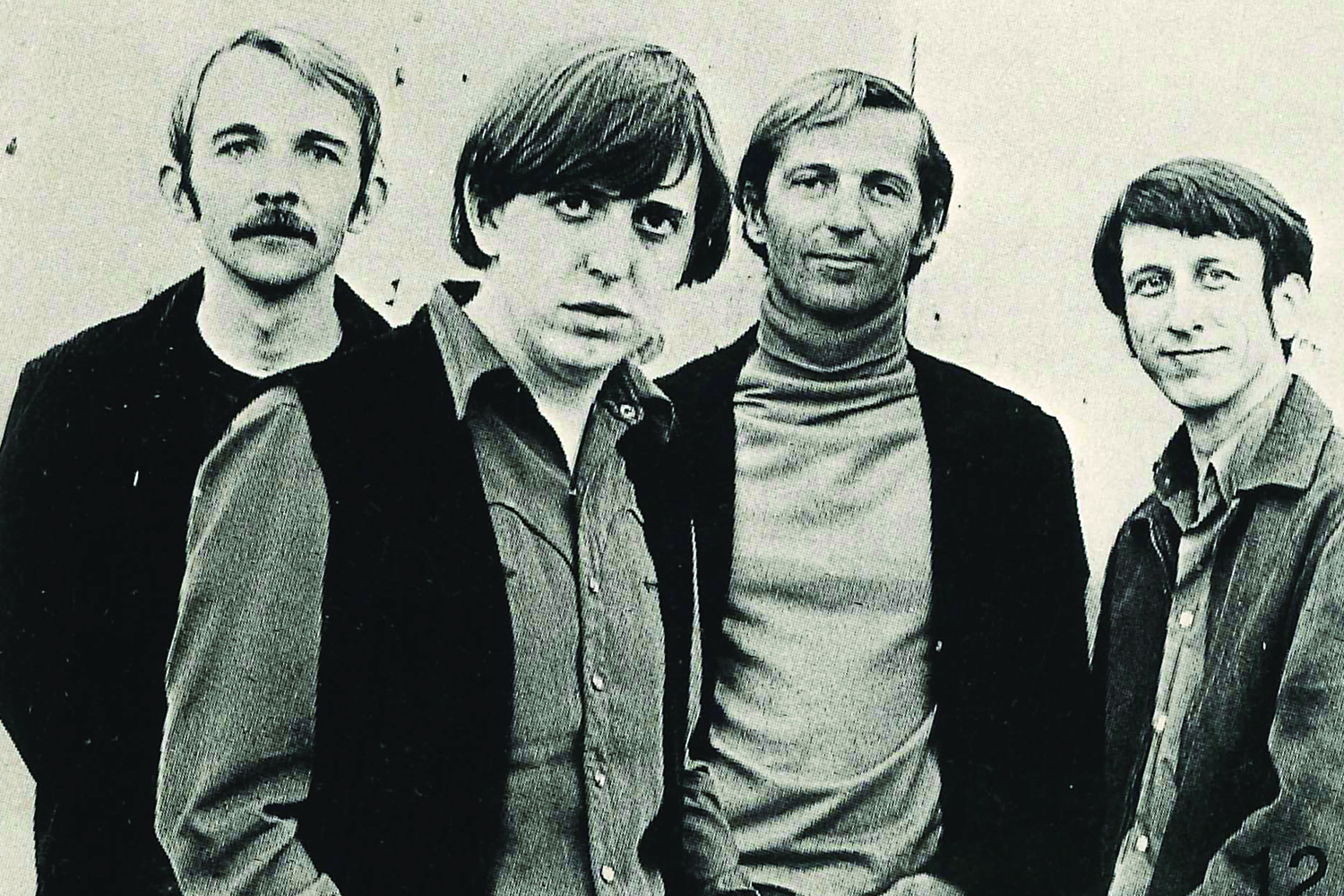 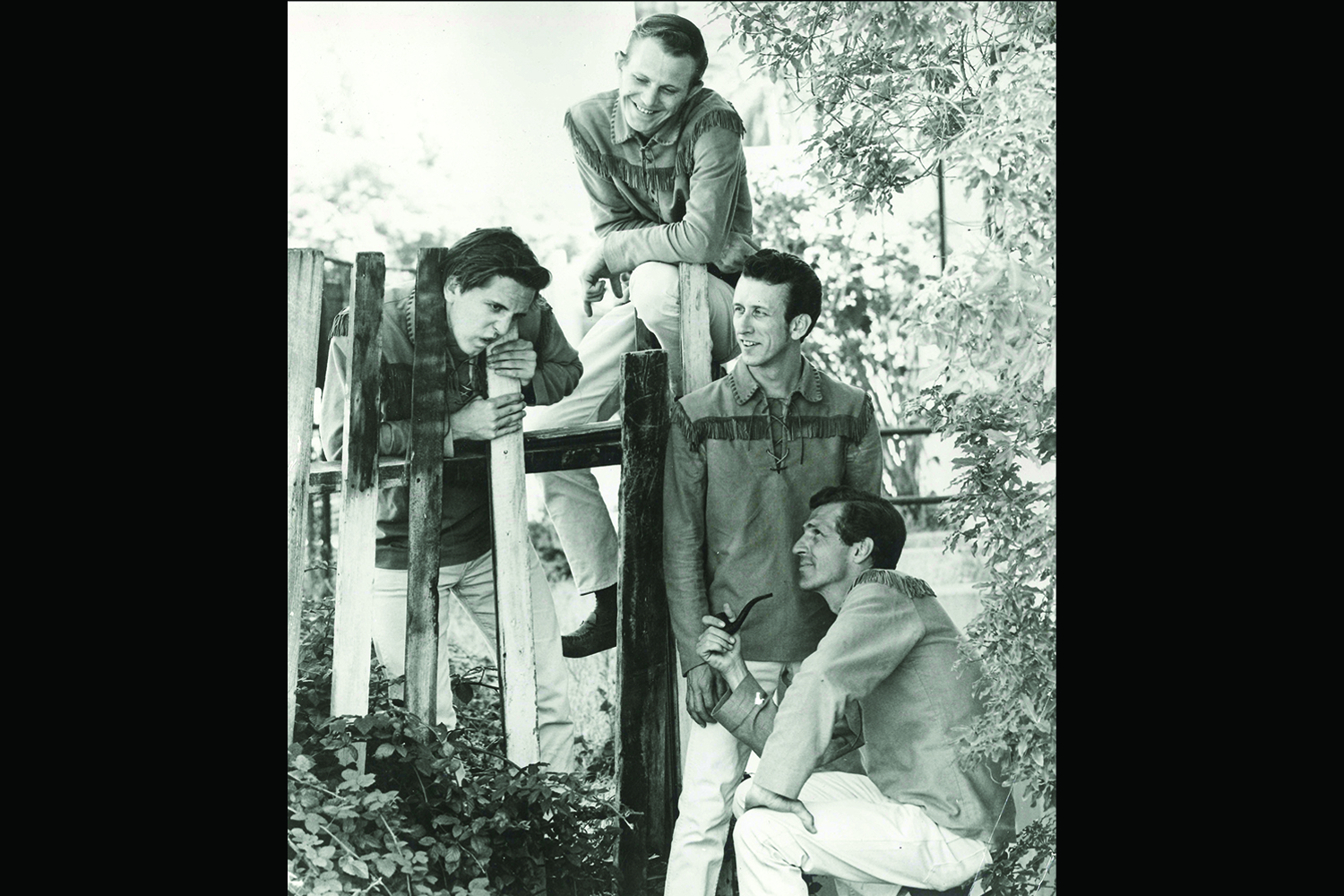 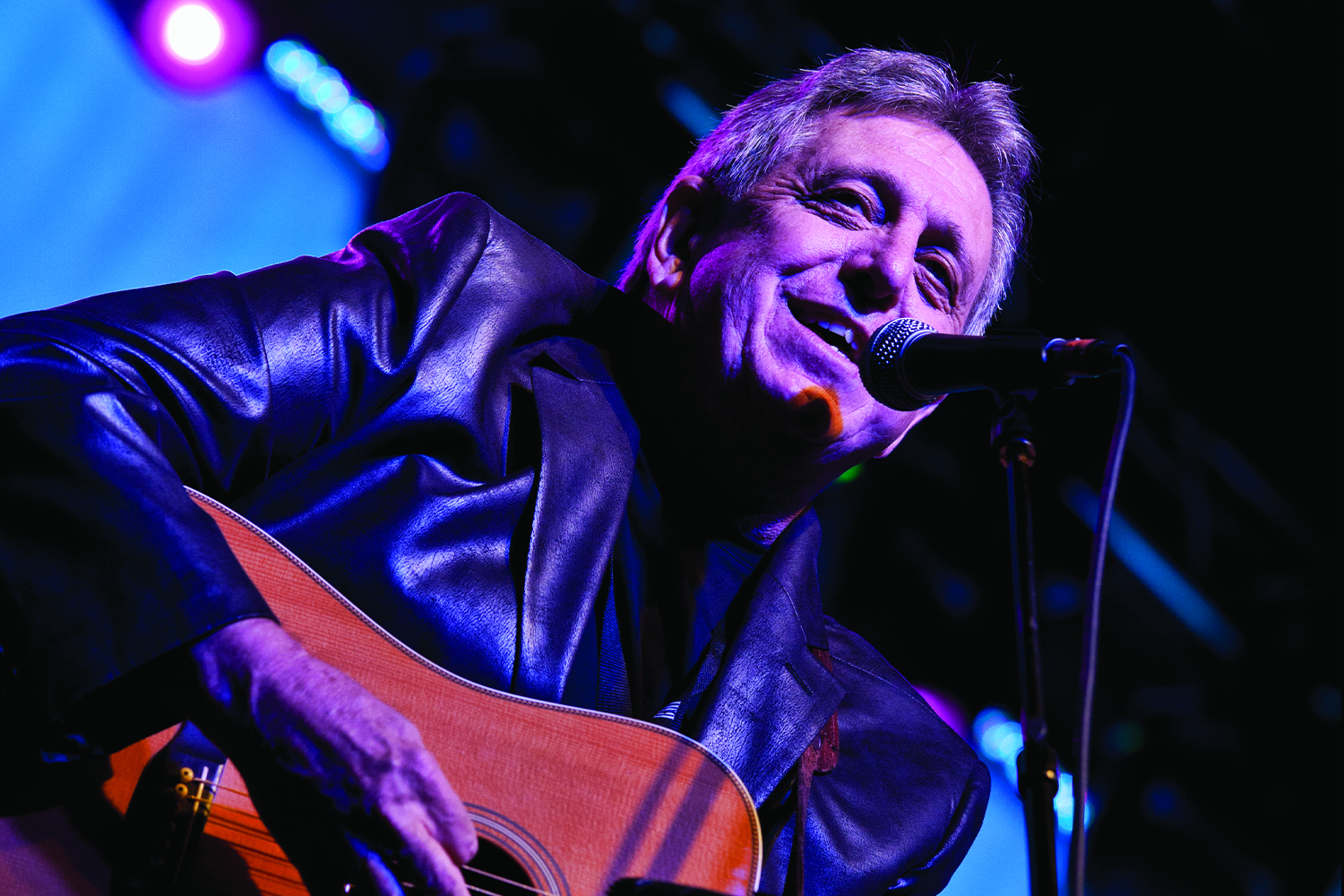 Imagine you’re a contestant on a game show called Something in Common.  Your challenge is to listen to a list of items and name their common denominator as quickly as you can.

Then it hits you: “The Dillards,” you shout.  “They’re all tied to The Dillards.”

We’ll explain why as we go along, but first let’s turn to the Dillard’s wide-ranging new album, Old Road New Again.  Like most Dillard collections, this one is by turns wistful and whimsical, forward looking and nostalgic, hopeful and apprehensive.  Apart from the solid underpinnings provided by the band members—Rodney Dillard, Beverly Cotten-Dillard, Gary Smith, Tony Wray and George Giddens—the album glows with guest appearances from such luminaries as Don Henley, Ricky Skaggs, Sharon and Cheryl White, Herb Pedersen, Bernie Leadon, Sam Bush and Tim Crouch.

Rodney Dillard, the lone surviving member of the original Dillards, calls Old Road New Again the “bookend” to the band’s 1968 masterpiece, Wheatstraw Suite.  That album saw The Dillards evolve from a basic bluegrass ensemble to musical risk-takers who used a full orchestra, electrical instruments, studio-layered voices and drums to convey their visions.  In so doing, they gave license and inspiration to generations of other experimenters.  This was the album that caught Elton John’s fastidious ear and led him to pick The Dillards as the opening act on his first North American tour.

While proudly displaying The Dillards’ bluegrass and string band ancestry, Old Road New Again is, like its predecessor, enhanced and enlivened by the sounds of drums, cello and electric bass.  The album’s title cut is a mini-history of The Dillards’ fabled musical journeys.  It jauntily name checks or alludes to many of the acts the band influenced, jammed or worked with, including the the Byrds, the Eagles (It was Rodney who convinced Don Henley to leave Texas and seek his fortunes in California), Buffalo Springfield, the Kentucky Colonels and the Nitty Gritty Dirt Band. “When someone tells the story,” the chorus rings out, “this old road is new again.”

“Earthman” accepts the bonds humanity imposes while still daring to gaze at the stars, and “Common Man,” with its lilting fiddle, maintains that an ordinary life can generate plenty of joy.  If you’ve ever wondered what the usually dreamy “Save the Last Dance for Me” would sound like cranked up to bluegrass speed and harmonies, you’ve got your answer here.  The majestic “Always Gonna Be You” asks the question, “Where does a heartbroken man go for redemption?”–and finds there’s only one salvation.  A droning fiddle and a frenetic clawhammer banjo frame “Funky Ole Hen,” a tall tale of an extraordinarily productive squawker who “lays eggs for the railroad men.”  It’s pure traditional old time music, and a pure delight.

“Sweet Companion” revels in the comforts of love that’s long-standing, while  “Whole World ‘Round” is a bouncy evocation of wanderlust, with an imagined home at the end of the road.  Whether you’re politically left or right, if you think the country’s going to hell in a hand basket, “Tearing Our Liberty Down” is just the song you’ve been waiting for.  “Take Me Along for the Ride” sings both of the fortunate ones America has carried forward and those it has left behind.  The pensive “My Last Sunset” is a short course in wrapping up life’s loose ends and making “the most of the moments we have left.”

The original Dillards included Rodney’s brother, Doug, Dean Webb and Mitch Jayne.  One of their picking buddies early on was the wildly inventive John Hartford. After making a name for themselves in their hometown of Salem, Missouri, they moved to Los Angeles in 1962 and began performing in local clubs.  Within two weeks of their arrival in L.A. they were signed to appear as “The Darlings” on The Andy Griffith Show, a gig that lasted until 1966 and one that through the show’s continued airing has made The Dillards the most viewed bluegrass act in the world.

Having signed to Elektra Records soon after their arrival in L.A., The Dillards released their first album on that label—Back Porch Bluegrass—in 1963.  One of the cuts on the album was “Duelin’ Banjos,” a song that would become a pop hit 10 years later when Eric Weissberg and Steve Mandell recorded it for the movie Deliverance.

Although Earl Scruggs played the theme song for the 1967 movie Bonnie and Clyde, Rodney played guitar for the soundtrack and Doug did much of the remaining banjo work. Scruggs later chose Rodney to appear with him on a joint tour.

And on went the impact.

“I became a ‘disciple’ of The Dillards,” says the Nitty Gritty Dirt Band’s John McEuen.  “Rodney’s voice stood out then, and the songs rang true to my young ears—ears in search of music that would take me away.   It did. The albums with The Dillards were perfect in execution and got me hooked. Without Rodney’s influence on my young notes and attitude, there would not have been a Nitty Gritty Dirt Band, nor a Will the Circle Be Unbroken album (which was placed in the Grammy Hall of Fame and the Library of Congress).”

Steve Martin, another early fan and aspiring banjoist, once opened for The Dillards.  Impressed by their willingness to take musical chances, Sam Bush looked to The Dillards, among others, when he was forming Newgrass Revival.  Many Dillards compositions have become bluegrass classics—among them “There Is a Time,” “Dooley” and “Old Home Place”–and have been covered by acts as varied as the Avett Brothers, Phish, Widespread Panic and Old Crow Medicine Show.

The original Dillards were welcomed into the International Bluegrass Music Hall of Fame in 2009.  Their plaque reads, in part, “The band’s unique flair for songwriting and arrangement would have a huge impact on a broad range for future musicians in the bluegrass and pop music worlds and an important influence on the country-rock movement.”