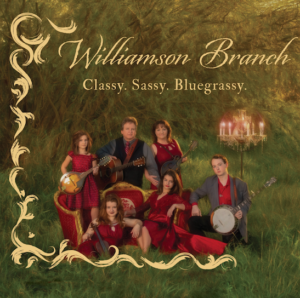 “This past year we’ve been thrilled to watch thousands of new folks experience Williamson Branch for the first time via chart singles, viral videos and many many tour dates,” says Kevin Williamson. “Our newest Pinecastle CD, ‘Classy. Sassy. Bluegrassy.’ is the culmination of all that hard work and excitement. We can’t wait for folks to hear it!!”

The first taste of Classy. Sassy. Bluegrassy. came in the form of first single, “Blue Moon Over Texas.” The band also just released the official video for the song earlier this week. Shot on location at a working ranch, it fits perfectly with the track’s message and lyrics. It was first unveiled via The Boot, who gave fans the exclusive world premiere (watch HERE). The song has already began turning heads, receiving significant airplay throughout North America in places like SiriusXM and Knee Deep in Bluegrass. Williamson Branch will also be playing very special album release shows this weekend in Texas to celebrate.

Throughout the collection, songs showcase the group’s unique blend of Bluegrass, American music and Gospel influences. The project marks newest member Anthony Howell’s first album as a part of Williamson Branch, where the multi-instrumentalist played on the entire record. Classy. Sassy. Bluegrassy. places a spotlight on each member’s vocal abilities, with Kevin, Debbie, Melody, Kadence and Caroline Williamson each performing lead on different tracks throughout the collection. With a combination of upbeat fast-paced songs, mixed with slower ballads, there’s something for every music fan. They’ve began explaining the song selection process on social media, describing the latest single in detail, along with their cover of Earl Thomas Conley’s “We Believe In Happy Endings.”

Williamson Branch looks to capture the magic from their previous album, Free. Over the last year, their fanbase has rapidly expanded after the release of their viral covers of “I’ll Fly Away” and “Amazing Grace,” which have an incredible combined view count over 14.5 million. To keep up with all things Williamson Branch, visit their official website HERE, or follow them on Facebook to join the journey.

Classy. Sassy. Bluegrassy. Track Listing:
1. Blue Moon Over Texas
2. Half Past You
3. The Ballad of Dan and Tom (Don’t Cry)
4. We Believe In Happy Endings
5. Over The Mountain
6. Hey, Mr. Right
7. The Prettiest Flowers Will Be Blooming
8. Gonna Ride Up In The Chariot
9. With Body And Soul
10. Mindy Mae
11. Thank You, Lord, For Your Blessings On Me
12. I’ll Go With You