Nashville, Tenn. – Father/son pair JB & Jamie Dailey continue to turn heads with their brand new album, Step Back In Time. Released via Pinecastle Records, the collection features 13 new recordings and serves as JB’s official debut album.  Upon its first week of release, the project has already started leaving its mark, debuting at No. 3 on the Billboard Bluegrass Albums Chart. It also continues to hold at No. 1 on Amazon’s Hot New Releases Bluegrass chart. Fans can download and stream the record HERE.

Following the runaway success of the record right out of the gate, JB & Jamie have decided to announce the second single from the album. The track previously made famous by Bluegrass legend Doyle Lawson called “Will The Angels Play Their Harps For Me” will serve as the follow-up to the album’s charting debut single, “Nobody’s Darlin But Mine.”  They recently channeled their roots with a stripped down live performance of “Harps.” Radio is already buzzing about the new single, with it recently storming its way to No. 2 on the AirPlay Direct Indicator Charts earlier this week.

JB’s inspirational story has captivated music fans, grabbing attention with his heartfelt story. Despite battling Parkinson’s, that didn’t stop the 73-year-old from recording (when he was feeling up to it) and releasing this debut album, defying all the odds.  Growing up, Jamie would often sing together with his father JB, ultimately inspiring Jamie to pursue a career in music. The Dailey & Vincent member not only sang on the record, but also produced and played instrumentally on the record alongside other singers and musicians like Bluegrass legend Doyle Lawson, D&V co-founder Darrin Vincent, Country and Gospel Music Hall of Fame Statler Brothers member Jimmy Fortune and more. The album is sponsored by Springer Mountain Farms Chicken. 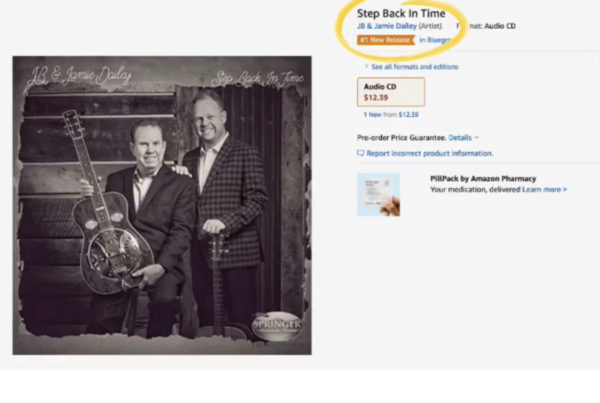