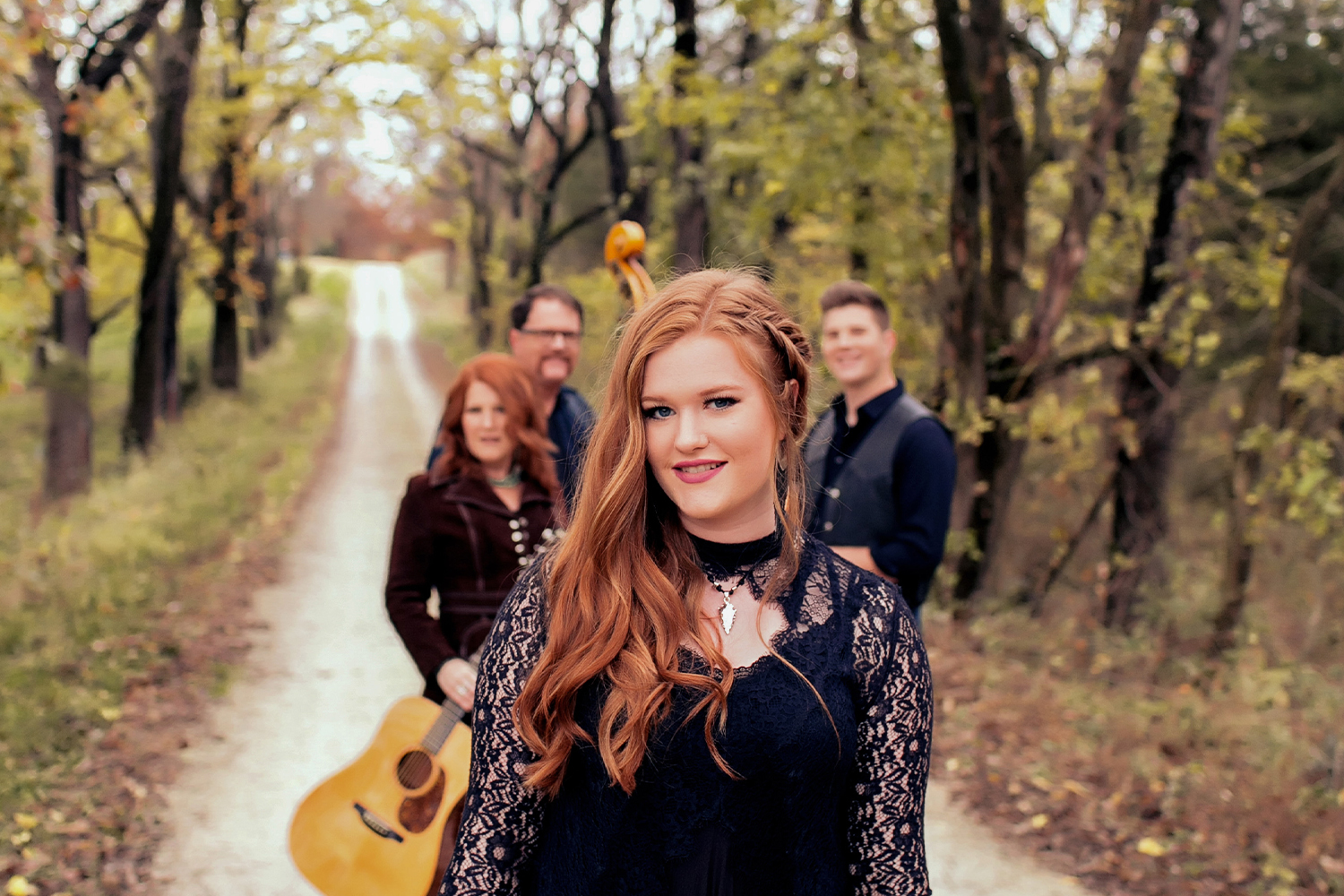 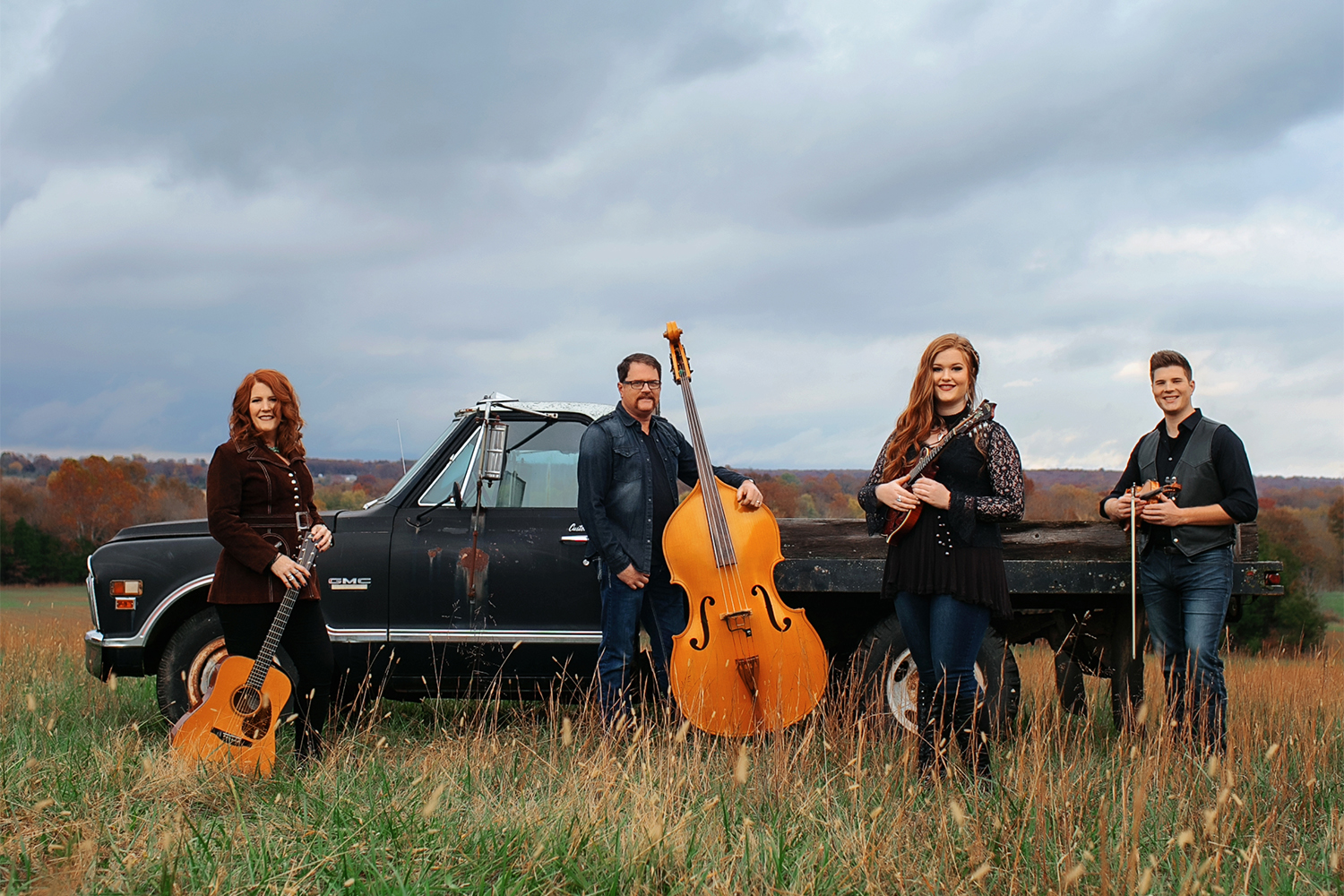 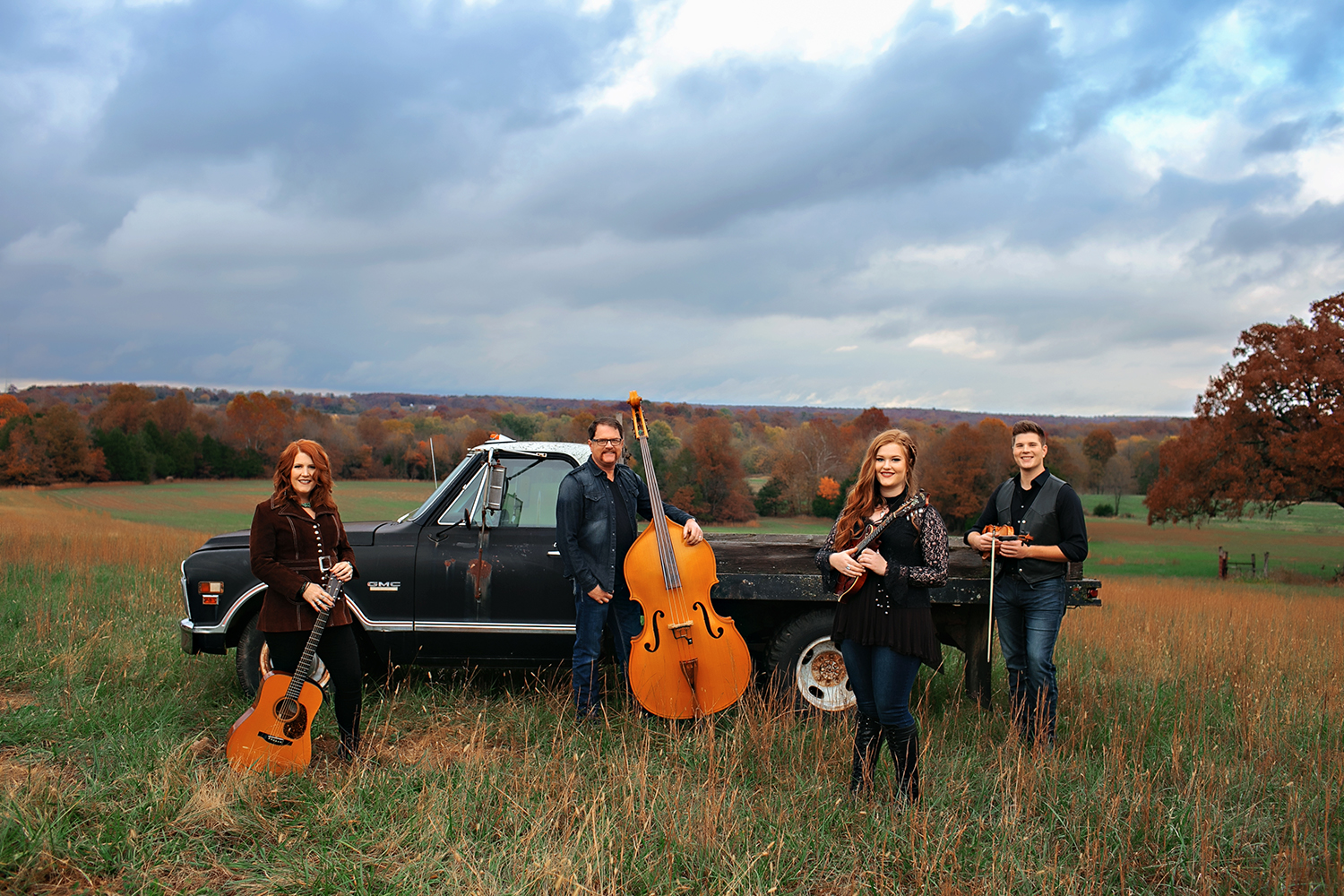 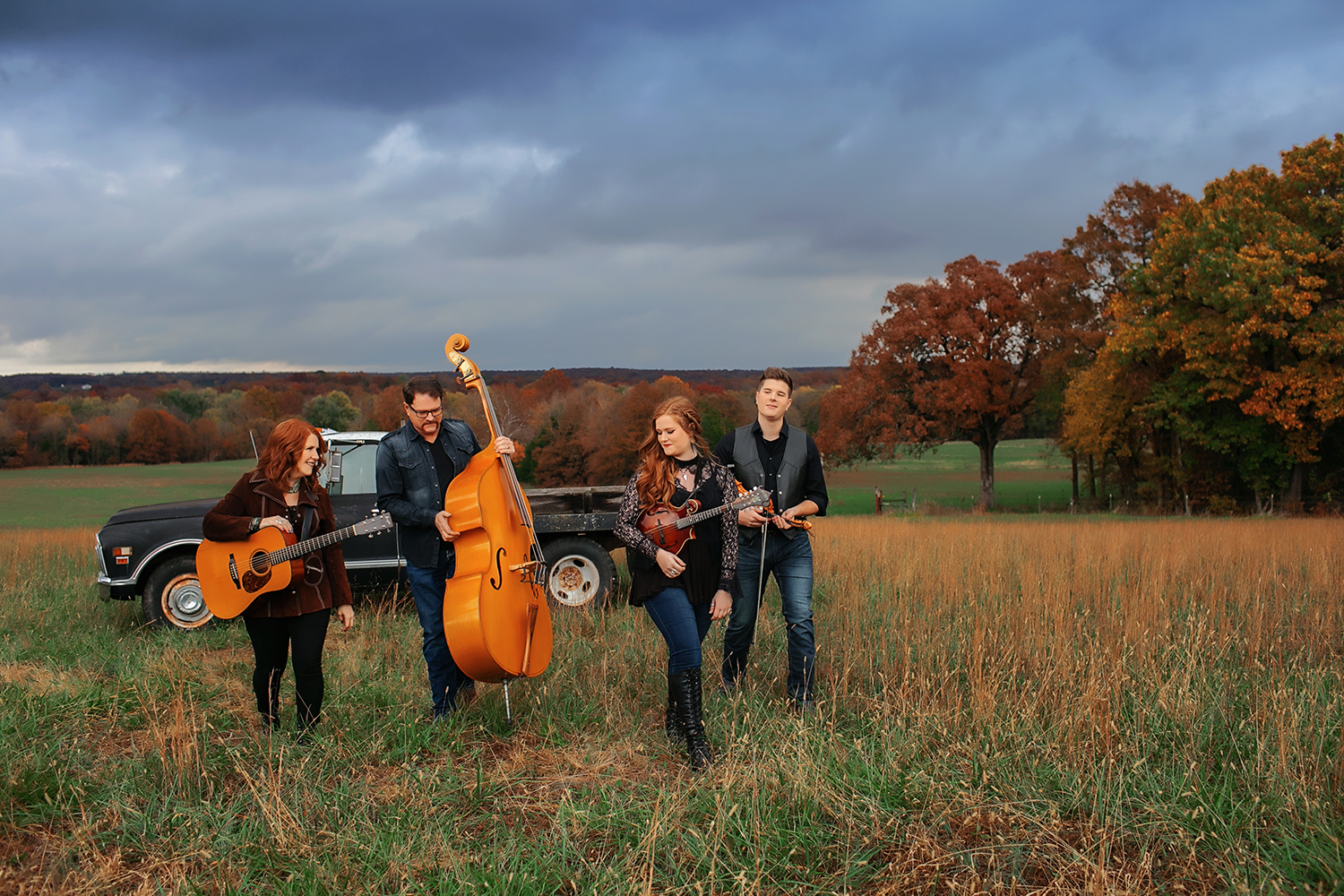 When their kids were young, Kathie and John Greer were seeking music that they could play around the house that the whole family could share. Gospel music was already in their life, but one day bluegrass music found its way into the mix, and it changed everything for the Greer Family.

Kathie and John Greer grew up in the farm country of Missouri. Kathie’s father worked for TV and radio stations while raising upwards of 1,200 hogs back at the family farm. She learned to play classical piano as a kid, yet when a chance opportunity for her to perform country music in a local band came along, Kathie immersed herself deep into that genre. Soon, she fell in love with artists such as George Strait, Reba McEntire, Patsy Cline, George Jones and more.

John Greer grew up on a dairy farm in his family’s area of the Show-Me State and would go on to work in the Agricultural industry. While still in high school, John and his future bride-to-be Kathie met while they were both members of the Future Farmers of America.

Once married and raising their kids Katie, Jase and Tate, Kathie and John were looking for music to play in the home that little kids could also listen to and appreciate. They still loved country music, but it became a bit awkward to be blasting songs about cheating and getting drunk and so on with toddlers wanting to repeat the lyrics all of the time.

“Our Sunday school teacher played bluegrass music with his kids. One day we went to one of those ‘Sunday night sit in a circle and sing’ events with them and we all loved it,” says Kathie Greer. “John went to that Sunday school teacher afterward and said, ‘I love what you are doing here, playing music with your family and everything.’ The man said, ‘Well, you could be doing this too.’ John said, ‘None of us know how to play any of these instruments.’ He said, ‘That doesn’t matter. You are going to waste a hundred dollars on something this month anyway. Why don’t you buy someone in the family a mandolin and give them lessons and start learning?’ John came home and suggested that we learn how to play music together with our kids, and I thought about it and said ‘yes.’”

That simple spark led to all in the Greer Family becoming bluegrass musicians. As the kids grew older, Kathie picked up the guitar she had owned since her college days and finally learned how to play it. John took up the bass, daughter Katie grabbed the mandolin, while brothers Jase and Tate played the fiddle and banjo respectively. The bluegrass music of Ricky Skaggs became influential for the family at that point as they dove headlong into the genre.

As the Greer clan’s talent vocally and on their respective instruments increased, they named themselves Lindley Creek after a creek near where John grew up and began to perform locally. Eventually, as the kids grew older, the group performed at festivals, in churches and in small venues. There came a point, however, as their tour schedule continued to expand, that John had to decide to leave his day job. It was then the Greer Family knew they were all in. Lindley Creek had become a full-time, traveling band.

The evidence of this uncommon level of commitment was impressive. The Greer Family brought in a professional performance coach and worked hard to perfect their live act. They sold their house at one point and put their life savings into the purchase of a tour bus, which was their only full-time dwelling for four years. Then, they bought a church back in Missouri because it had a stage for rehearsals, eventually remodeling the building and turning it into a demo song recording studio.

A decade and a half later, as all three Greer kids began to enter adulthood, Tate would eventually leave Lindley Creek to start his own family and pursue another career. Now a foursome, the group decided to shoot for the stars and perfect their own unique sound. They set out to record an album reflecting their growth as artists, and from the beginning, they knew who they wanted as their producer, fiddle great Jim VanCleve.

Jase Greer boldly sought out VanCleve for an online fiddle lesson as a teenager, and made the connection with the accomplished music veteran.

“I was trying to learn how to be a better fiddler when I bought an instructional DVD by Jim VanCleve,” says Jase Greer. “On it, he talked about the different roles the fiddle player needs to take on while in a band. That was eye-opening when it came to my fiddle playing. When I was 16 or 17, I saw on Facebook that Jim VanCleve was giving lessons online. He was my favorite fiddle player, so I asked my Mom if I could do it and she said ‘yes.’ So, I booked my first Skype lesson with Jim. When I played the fiddle back then, my wrist would hurt a lot. Jim noticed my left wrist was bent all of the time and he said, ‘That has to be straight.’ He showed me how, and suddenly I could reach all my notes, they were consistently in tune, and my wrist didn’t hurt at all.”

A couple of years later, after VanCleve turned Jase’s fiddle technique around, the Greer Family visited Nashville. Jase asked VanCleve for an in-person fiddle lesson while they were in town.

“Jim said ‘yes’ to the lesson, which shocked me,” says Greer. “When the lesson was done, Jim came outside to talk with us about our band and the direction that we wanted to go musically. We said that we were ready to make music we actually wanted to make, rather than what we felt we were expected to make. Jim said, ‘Man, I would produce an album for you guys.’ We were amazed, but of course we said ‘yes.’ When it was all set up and we were in the studio, Jim brought that same know-how that I experienced with him in our first fiddle lessons, and he put it into our album.”

The end result is Lindley Creek’s impressive recording: Freedom, Love and the Open Road. With special guests Rob Ickes, Jason Moore, Seth Taylor, Aaron Ramsey, Todd Phillips and Cia CherryHolmes brought in as studio aces, the final project represents the album that Lindley Creek has wanted to make all along.

Freedom, Love and the Open Road features an excellent selection of songs chosen for the project along with original cuts written by Kathie and Jase Greer. Tight and smooth family harmonies are present on the recording, a phenomenon that only kin can share due to shared accents and intuition. But more than anything else, this album showcases the lead singing talents of Katie Greer.

While Lindley Creek toured throughout the heartland from North Dakota to Texas, points mostly west of the Mississippi River in the past, they plan to connect with fans in the Southeast, the Midwest and the heart of Bluegrass Country with the release of Freedom, Love and the Open Road.

“I listened to just bluegrass music until I was a teenager, and then I began to listen to country and pop music and everything else after that,” says Katie Greer. “With my vocals, I feel like I draw from other musical genres and not just bluegrass. I love bluegrass, but I also love Whitney Houston and all of the powerhouse female vocalists. I also like John Mayer a lot. I like any artist that can sing really well and can connect themselves emotionally to the music. When I was in the studio recording Freedom, Love and the Open Road, I learned so much. Jim is a great teacher who really took me where I wanted to go vocally. I knew where I wanted to be, but he showed me how to get there. It was very challenging for me. But, it is cool to learn and grow and finally understand things that you have wanted to understand for a long time.”

Watch for Lindley Creek to make their mark on the bluegrass and gospel scene very soon as the Freedom, Love and the Open Road album and the first single “Gotta Go” hits the airwaves. It is an exciting time as this new band breaks into the greater bluegrass scene with passion, talent and years of experience!