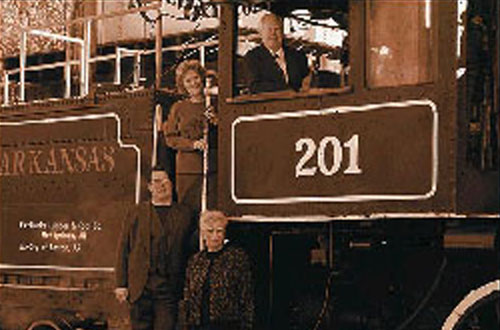 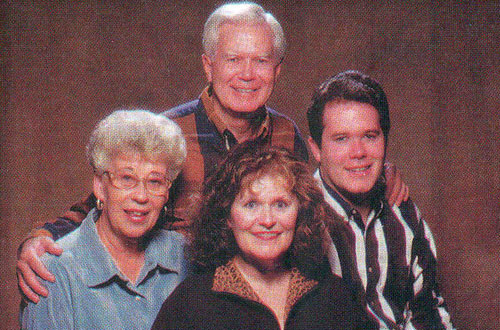 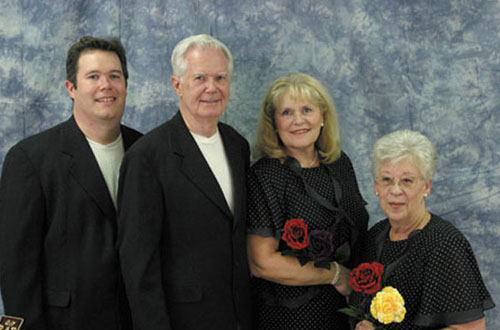 The Village Singers, present Gospel music in a unique manner that is a combination of toe-tapping, easy listening and inspiration as they sing bluegrass, Chuckwagon Gang style and your favorite church hymns. Harold Goad provides the instrumental lead on the banjo, mandolin and flat top guitar and sings baritone for the group. Harold has performed onstage internationally and has run sound for Albert E. Brumley Jr. Harold’s wife, Kathie, who sings lead, was raised in a Gospel singing family and has been singing Gospel music since she was eight years old. Kathie also sang for Arkansas Gov. Bill Clinton in the late 80’s as part of the Pine Mt. Jamboree. Their son, Warren, [Smiley] plays rhythm guitar and sings the bass part. He recently sang on Larry Stephenson’s Gospel CD “Thankful” that also included guest singer Sonya Isaacs. Warren also does studio recordings, sound reinforcement jobs and is active in his Churches AV department. Warren’s wife Jennifer plays the upright bass for the group. She splits her time raising their two young sons, performing onstage with the Village Singers and her family group, Lindsey Duffin & New Direction. Kathie’s sister Bonnie Whitener no longer is singing with us due to her husband Carl having a bad stroke. Keep them in your prayers. The Village Singer’s are now truly a family group. The Village Singers recorded on the Pinecastle label and have endorsements with Intellitouch tuners, Gibson Banjos, Cheet-A-Keys banjo tuners, Cat Eyz banjo bridges, Mitchel’s Plate-Mate bridgeplate protectors, and Thomas mandolins. The Village Singer’s first release on the Pinecastle label “There’s a Great Day Coming” was nominated for the prestigious AFIM Indie award in the Southern & Bluegrass Gospel category in 2000 and has become Pinecastle’s biggest seller as of June 2003. The CD entitled “A Tribute to Jimmie Davis” was a top five finalist for the coveted Dove award in the Bluegrass-Gospel Album category in 2003. The Village Singers were in the top five nominees for the Gospel Group of the Year and their release of “Who put the color in the Rose” was nominated for Song of the Year from The Singing News and Solid Gospel Radio Network Front Porch Fellowship Awards in ‘07. Also, their recording of “On My Father’s Side” has been the most requested song on Gospel programs on many radio stations.